Major benefits of tax reform: income tax within 1 million yuan is as low as 5%, and the value-added tax exemption base is increased by 3.3 times 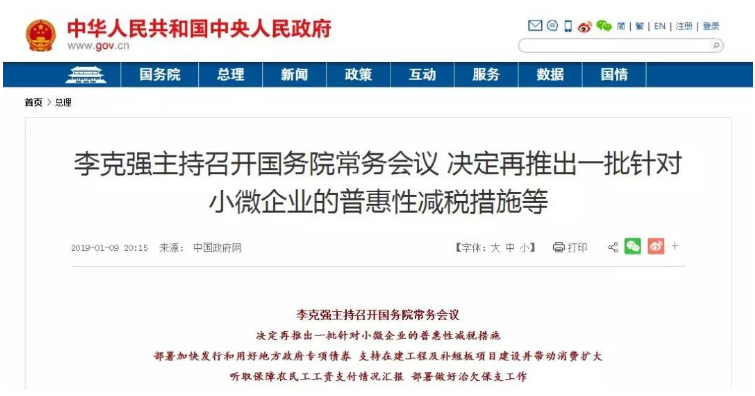 Li Keqiang presided over an executive meeting of the State Council

Deploy to speed up the issuance and use of local government special bonds, support the construction of construction in progress and short-term projects, and drive the expansion of consumption

Listen to the report on guaranteeing the wage payment of migrant workers, and make arrangements for the management of arrears and guarantees

Premier Li Keqiang of the State Council chaired an executive meeting of the State Council on January 9, and decided to launch another batch of inclusive tax reduction measures for small and micro enterprises; to deploy and speed up the issuance and use of local government special bonds, to support projects under construction and to make up for shortcomings Build and drive the expansion of consumption; listen to reports on the payment of wages for migrant workers, and make arrangements for the management of arrears and guarantees.

The meeting pointed out that it is very important to implement the spirit of the Central Economic Work Conference, keep the economic operation within a reasonable range this year, and strive to achieve a stable start to the first quarter. Must be multi-pronged. Good development of small and micro enterprises is related to stable economic operation and stable employment. The meeting decided to introduce a new batch of inclusive tax reduction measures for small and micro enterprises. The first is to greatly relax the standards for small and low-profit enterprises that can enjoy preferential corporate income tax, and at the same time increase the intensity of income tax incentives. 25% and 50% are included in the taxable income, reducing the tax burden to 5% and 10%. The adjusted preferential policies will cover more than 95% of tax-paying enterprises, of which 98% are private enterprises. Second, for small-scale taxpayers, mainly including small and micro enterprises, individual industrial and commercial households, and other individuals, the value-added tax threshold is increased from 30,000 yuan per month to 100,000 yuan. The third is to allow provincial (regional, municipal) governments to reduce local taxes such as resource tax, urban maintenance and construction tax, stamp tax, urban land use tax, cultivated land occupation tax and education surcharges within 50% of small-scale value-added tax taxpayers. ,Local education surcharges. The fourth is to expand the scope of preferential policies for investing in start-up technology-based enterprises, so that venture capital enterprises and angel investors investing in such enterprises have more tax incentives. Fifth, in order to make up for the local financial gap caused by large-scale tax and fee reductions, the central government will increase general transfer payments to local governments. The above tax reduction policy can be traced back to January 1 this year, and the implementation period is tentatively set for three years. It is expected to reduce the burden on small and micro enterprises by about 200 billion yuan each year.

The meeting pointed out that it is necessary to focus on optimizing the structure and stabilizing domestic demand, and play the role of fiscal and monetary policies more effectively. Implement the comprehensive RRR cut measures announced recently, continue to implement a prudent monetary policy, insist on not engaging in "flooding", timely pre-adjust and fine-tune, ease the financing difficulties of private enterprises and small and micro enterprises, and ensure reasonable and sufficient market liquidity. Promote the expansion of employment and consumption. At the same time, it is necessary to speed up the issuance and use of local government special bonds. The meeting decided that, first, the issuance of the 1.39 trillion yuan of local government bonds that have been authorized by the National People's Congress in advance should be launched as soon as possible. Quickly determine the distribution plan for special bonds for the whole year, and strive to basically complete the issuance by the end of September. The second is to give better play to the important role of special bonds in stabilizing investment and promoting consumption. Funds raised from special bonds should be used first for projects under construction, to prevent "half-pulled" projects, to support major projects within the plan, and to resolve the arrears of government projects. In places where construction conditions are available, start a batch of major projects such as transportation, water conservancy, and ecological and environmental protection, and form a physical workload as soon as possible. Where conditions are not yet available, preliminary work such as material preparation should also be carried out as soon as possible. Third, monetary and credit policies should cooperate with the issuance of special bonds and supporting financing of projects, guide financial institutions to strengthen financial services, and ensure the follow-up financing of major projects. The fourth is to standardize the management of special debts, implement repayment responsibilities, and strictly control the hidden debts of local governments.

The meeting called for strengthening the governance of migrant workers' wage arrears. All localities should give priority to repaying the arrears of wages caused by the arrears of government investment projects. If the enterprise is in arrears of wages, it shall be ordered to settle within a time limit, and those who fail to pay within the time limit shall be severely punished in accordance with the law.